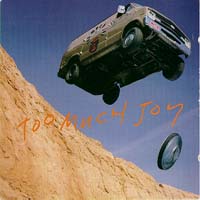 We’re focusing on a track from Mutiny this week. Here’s what Sandy remembers about “Sort of Haunted House”:

The initial riffs for SOHH were composed to my rinky dink drum machine. It was a period of time when we were ripping off beats from some of our favorite hip hop songs (need I add, clumsily) and seeing what came out (“Unbeautiful” began the same way). Of course, when we took the song into a live setting, Tommy brought it to life in his own inimitable way.

When we recorded it we laid down that original rinky dink beat to retain some of the loopy vibe, and you hear a snippet of it in the song’s outro — followed unceremoniously by Tommy destroying said drum machine. Tim and Jay must have taped it back together. 🙂

Since Tim can’t say it, I will: these lyrics are awesome – maybe some of our best – and the song was fun to play, though rarely performed (while I was in the band).

My own recollections pretty much match Sandy’s, though I’m not quite as fond of the lyric as he is (personally, I think the bassline is what makes the song; it’s up there with the bass riff in “James Dean’s Jacket,” in terms of bouncy goodness). To me, the lyric was just an exercise in writing a story-song that Johnny Cash might sing. The title comes from a stray line in Don DeLillo’s Libra — a particularly DeLillo-ish sentence in which a character describes the overall vibe of some location with five simple words: “Very sort-of haunted house.”

Like a lot of DeLillo sentences, that one made me pause in admiration, and the song grew out of that pause, as I tried to imagine what a literal sort-of haunted house might be like to live in. I figured the phrase “sort-of” meant there’d be a ghost, but not one you were particularly afraid of.

For some reason, this one never found a permanent home in our set lists, although we did play it live a bunch before we recorded Mutiny. I remember, because the band had an argument about whether or not to play it at some show in Minneapolis that was being broadcast on a local radio station. I wanted to play it, because then we’d have a decent recording of a brand new tune, but the other guys feared it wasn’t solidified enough to get documented for all time like that.

I don’t believe the bashing metallic noise you hear at the end is an actual drum machine being broken. We may well have recorded Tommy kicking a drum machine to bits, but if memory serves the actual sound of that wasn’t particularly dramatic. So we set up a microphone in the kitchen of Messina Music and did numerous takes of us dropping a container of a bunch of random metal objects (washers, hammers, and other stray crap) onto the tiled floor. We kept adding more metal junk and dropping the box from an ever higher point until we got a noise that sounded sufficiently cathartic.

The fact that it also sorta sounds like a guy with a noose around his neck kicking the chair out from under him and making whatever pipe he’s tied the other end of the noose to go “Sproing!” is just a bonus.

Update: Bill just sent through his own blurbage about the tune:

When we first discussed my producing the album that was to become Mutiny (or, Don’t Worry, Bea Arthur) one of the songs on the demo the band sent me was “Sort Of Haunted House.” And in many ways this was the song that helped me ‘get’ them. Its lyric sensibility (like the fact that it’s a SORT OF haunted house) seemed to me to typify the band’s whole smart, arch, self assured (wise ass!) but also self deprecating aesthetic.

That IS TMJ. No other band could have written it.