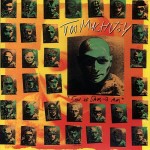 This one began life as “a rock opera for two voices and bass,” which Sandy and I wrote in an apartment in Tuckahoe, NY one drunken night so we would have something to perform at a scheduled appearance on Wesleyan’s college radio station that Jay couldn’t attend because he was in California.

Because we were A) lazy and B) didn’t have much time, the “rock opera” was little more than some repeated riffs with half-spoken/half-sung narration that attempted to string together a couple of random songs we’d already completed which didn’t actually have anything to do with each other: “Sense of Power,” “God’s a Fag” and “Connecticut.”

The whole thing was pretty stupid, even by TMJ’s lax standards at the time, and it completely bombed when we played it at the station, so we wisely trashed everything but the title after the disaster at Wesleyan. A few months later the girlfriend I’d been sharing the apartment with went off to medical school. The band was heading to California to start recording what would become Son of Sam I Am three weeks after that, so I asked my dad if I could crash at his new house in the interim. His exact words to me were, “Guests, like fish, smell after three days,” which is a quote from either Ben Franklin or Mark Twain, depending on who you believe.

It wasn’t his warmest moment, but he’d just finished divorcing my mom, and had sold my childhood home in Scarsdale and moved into a new place in Chappaqua, so I guess he wanted to start his new life unencumbered by memories of his previous one. And it gave me an actual subject for the snarky title.

Many years later, my dad told my wife that Son of Sam I Am was his favorite TMJ album, because it ended with the words, “Hi, Dad.” Donna said, “I guess he never read the lyric sheet, huh?”

I said I guess not. But I’m glad he likes it.

Here’s the song as it eventually appeared on Sam:

And here’s a hint of what the rock opera version sounded like. As I said, it’s royally dumb, though I’m fond of Sandy’s dramatic delivery, and I still chuckle when the bum says, “I have epilepsy, just not at the moment.” The version below is just the bits that were meant to go in between the actual songs. It was recorded as it was being written on my answering machine, which accounts for the loud BEEPs you hear whenever we pushed pause, as well as the stray bit at the end from my friend Leslie, who called while we were working.

Not sure when this is from, but here’s Twisted Sister singing the praises of Too Much Joy’s “Donna Everywhere” video, presumably on MTV.

The guy on the right, Jay Jay French, actually approached the band about managing them at one point. Tim and Jay had an introductory meeting with him at his Manhattan apartment, which was decorated with all kinds of Twisted Sister memorabilia. He struck us as very smart and generous, but unfortunately he tried to bond with us by showing off his gear, and Too Much Joy know little and care less about guitars and amplifiers (one night I had to use Jay’s spare SG when my red Telecaster wasn’t working, and I was amazed by how much easier it was to play. When I shared my amazement with Jay after the show he just said, “I know! Why the hell do you think I use an SG?” Jay’s response pretty much sums up Too Much Joy’s approach to equipment selection).

Anyway, Jay Jay had some rare old guitar he was very proud of, and we were doing our best to act impressed. I think it was a Les Paul, but it was made of some unique kind of wood they only used once and was one of like three in the world or something. And to prove how special it was, he held it under Jay’s nose and told him to sniff it, because you could smell the special wood finish.

There were a lot of challenging moments in Too Much Joy’s career, but keeping a straight face while the dude from Twisted Sister made Jay smell his guitar was one of the hardest.

Clicking the button below will get you the same premium MP3s as every other download button on the site. (If you haven’t heard it yet, you can listen to the whole thing for free right here.) 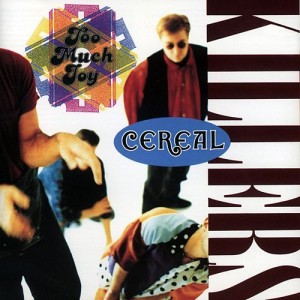 As I said when we launched this refurbished site, we’re hoping to force ourselves to keep it updated regularly by creating some recurring features. So here’s the first in what will be a continuing series if we don’t flake out. It probably won’t always happen weekly, but “Song of the Undetermined Interval of Time” isn’t quite as catchy. Hopefully I won’t be the only one writing these. Anyway, we’re starting with a track from Cereal Killers called “Good Kill.”

Like a lot of TMJ lyrics, this one began with the title, which was spoken from a Navy F-14 in 1989, after its pilot had just shot down a Libyan MIG (it’s how the radar weapons officer told the pilot his missile had found its target).

END_OF_DOCUMENT_TOKEN_TO_BE_REPLACED 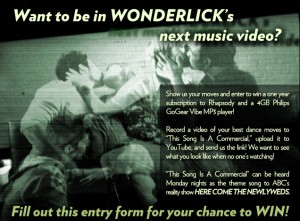 To promote the video for “This Song is a Commercial,” the label’s put together a contest. Basically, you send in video of yourself dancing to our song, and you get entered to win a portable MP3 player plus a year’s subscription to Rhapsody (we’ll probably load the player up with Wonderlick’s collected works, as well).

We’re planning on splicing together the footage we receive for our next video, so whether or not you win the sweepstakes, you’ll probably wind up in a Wonderlick music video. You can enter here: 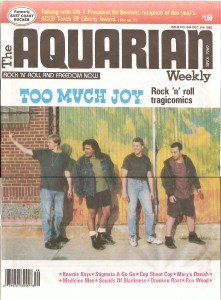 Just added this Aquarian cover to the Photos section, and also added a gazillion-page feature from Reflex Magazine to the Cereal Killers press page.

The Reflex piece was written by Penn Jillette, and is how we met him. He’s far more articulate and complimentary about the band and our songs than any of us are in the interview.

By the way, if you’d like to be alerted anytime we update the site, you can subscribe to the RSS feed here. (It’s also always available at the bottom of this page, though it’s pretty tiny and easy to miss).

My friend Jean Cook from the Future of Music Coalition (and also a fine violinist who plays with Jon Langford, the Waco Brothers, and a slew of other artists I adore) stayed at my house last month, and asked if I’d talk into her video camera for a project FMC is doing to promote community radio.

I was happy to babble for Jean. That’s the Quirk abode in the background, and this is what I look like when I wake up in the morning. If you squint really hard, you can just make out the hand-crank for an old Evel Knievel toy that was the best toy ever invented in the history of the universe.

You can learn more about the “I Support Community Radio” project here.

Welcome to the completely refurbished Too Much Joy site. We’ve set things up so you can listen to almost everything the band ever recorded, free of charge, in its entirety. You can also buy most of it, if you’re so inclined, as well as T-Shirts and DVDs. In an obsessive-compulsive fit, we’ve scanned 20 years worth of press clippings, so you can marvel at how often words like “sarcastic” and “bratty” were used to describe TMJ, and cheer whenever someone notices a hint of actual feeling or insight in the band’s ongoing attempt to communicate honestly in an insane world.

There are videos to watch, too, and photos with embarassing haircuts and poor clothing choices to laugh at.

Mostly, though, there’s this page you’re on right now, which has been designed to update far more frequently than the old site. Each band member has his own account, and is being encouraged to post here whenever the mood strikes him. To encourage this behavior, we’re creating some recurring features that you can expect to see updated at least monthly, if not more often. One, Song of the Week, will spotlight a tune from the TMJ canon and gather one or more band members’ recollections about the making and/or meaning of same.

We’ll get that one started next week. We’re launching with something a bit meatier: the Rehearsal Tapes Series, which digs unreleased songs out of the vaults and explains precisely why they never saw the light of day, or what they turned into when they did. For the pilot episode below, we’ve pieced together the album TMJ would have released in ’93 or ’94 if they’d stayed with Warner.

So take a listen to that, browse around the rest of the site, and let us know what you think and what’d you’d like to see more or less of. There are free goodies scattered here and there, and most of the player widgets you’ll stumble across can be shared on Facebook, re-posted on your own site, emailed, or whatever.

If this works the way we hope it will, this new site will serve as the type of drunken conversation with fans and friends the band used to have before and after shows.

(That picture, by the way, is TMJ as computer game heroes. The lady in between Sandy and, uh, Jay, is Liz Reay, who created it.)

We’re planning a recurring feature on this site we’re calling The Rehearsal Tapes. For each episode, we’ll dig through old cassettes looking for songs that, for one reason or another, never got the full studio treatment.

For this pilot episode, we’re cheating a little bit, as all these tracks were actually recorded in fancy studios, though most of them never got final mixes or mastering. But we wanted to put together an alternative history, like one of those sci-fi novels that imagines the South won the civil war or something. The player below answers the question, “What would TMJ’s fifth record have sounded like if it hadn’t taken them four years to find another label?”

We recorded dozens of songs after finishing the touring for Mutiny at the beginning of 1993 and the day Sandy left the band in the fall of ‘94, and while many of those eventually came out, either on the re-release of Green Eggs and Crack or the Gods and Sods collection, they never got assembled as they might have sounded in their own coherent package. So here we’ve combined those cuts with the original, unreleased versions of 6 tracks that wound up on …finally. All of them feature Sandy playing his Status bass and singing.

The original plan for album 5 (in Tim’s head, at least) had been to open with “Secret Handshake” and end with “Even the Queen.” What would have wound up in between those two is anybody’s guess. At least two of these probably would have been cut, and the order would likely have been different after the band argued about it for a while, but this is a reasonable approximation of what the denizens of an alternative universe got to buy at Tower Records (perhaps, in that alternate universe, Tower Records still exists).

Taken together, you get an odd mixture of bliss and resignation that feels quite a bit different from the loud-fast-still-rules vibe of …finally. Whether this is a good or a bad thing we leave to you to decide — that’s what comments sections are for, after all.

Update, 6/26: By popular demand, we’re making these tracks available for download. We hadn’t originally, because you can assemble most of this from existing albums if you’re so inclined, but in the name of convenience, and giving you more than streaming access to the Sandy …finally demos, here you go: