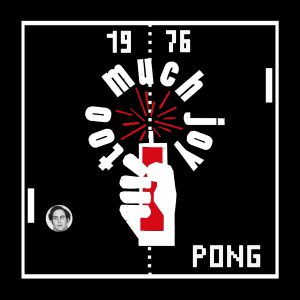 We’ve got another set of new/old songs for August’s First Friday event on Bandcamp. It won’t be out till Friday, but you can hear “Pong” right now on BrooklynVegan.

But we’ve also got a more momentous announcement: we’ve been having so much fun recording again, and have found the process of writing one or two new ones for each old one we revisit so inspiring, that we’ve decided to record a complete album that way.

Yup: we’re working on our first album of new material in almost a quarter of a century. It’s tentatively titled Last Century, because half the songs were written in the literal last century, and half the songs are being written in this, which sometimes feels as though it might be humanity’s last.

You can hear the latest fruits of that approach on August 7, when we release “Pong,” a brand new song, backed with the long-overdue studio version of “Hey Merlin!,” a tune we demoed for Cereal Killers but never officially recorded (though the original, live-to-two-track demo has surfaced on the fan-club only single Dr. Seuss is Dead, as well as the Gods and Sods compilation.

We’ve set up an IndieGoGo campaign to help fund the recording, so if you want to pre-order a copy of the album before it officially exists, you can do so there for $10, or you can contribute even more in exchange for various perks.

As bored as everybody else while self-isolating in June, Too Much Joy decided to see if they could complete a couple of songs in time for the next Bandcamp First Friday.

The result is New Memories, a 3-track EP. New Memories parts 1 and 2 were written and recorded June, 2020. Snow Day was written in the early ’90s, but never recorded till now.

Sandy and Tommy laid down the rhythm tracks at Riverworks, with the patient assistance of Matt Noble. Bill added his parts in his home studio, Jay recorded his with the help of his son Leo at home in Los Angeles, and Tim added his vocals at Anu Kirk’s home in San Francisco.