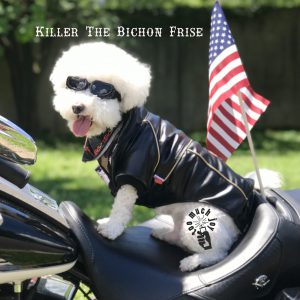 Another month, another donor-only single. This one’s called “The Song I Didn’t Write,” and it’s dedicated to to Chip Turner, who paid for a custom B-side but then told us to just keep the money and spend our time working on the album. He’s a dude.

“Killer the Bichon Frisé” was commissioned by Donna Shuster, for her rescue pup. He looks so good in his Harley gear, we’re posting the alternate art for the single instead of the actual cover which is nowhere near as good.

As always, if you want the music but slept on the IndieGoGo campaign that funded its creation, you can still sign up to receive all 13 singles (4 released so far; 9 more to come) here.