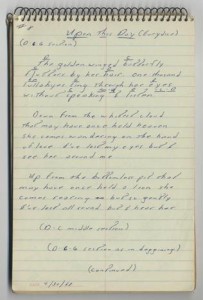 It took us a while, but we’ve finally created a lyrics section. You can browse lyrics by album, or by track title.

We’ve got just about every song Too Much Joy ever released in there. We left out covers, unless the band added some of their own words to it, or unless it’s “Seasons in the Sun,” because everyone always leaves off the third verse of that, and it’s the best part.

Let us know if you find any bugs in there — it’s got a bazillion links, and while we’re pretty sure they all work, we might not have double-checked every single one.

We didn’t know it at the time, but the shows we did while touring on the re-release of Green Eggs and Crack in 1997 would be the last gigs we played for ten years. And the last of those were two shows in one day in San Diego. The first was an afternoon set at some street fair; the second was a way more inebriated affair at a complete dive called Homer’s.

Tommy dug up this footage recently, which was shot by friends or fans using his camcorder. Here’s a surprisingly tight version of “Poison Your Mind,” which includes shots of a three year-old Abby Quirk dancing (which she does about as well as her dad).

After the jump, if you’re brave, is what the day devolved to after a lot of drinking and, if memory serves, a fever on Jay’s part. END_OF_DOCUMENT_TOKEN_TO_BE_REPLACED

These aren’t exactly rehearsal tapes, but they are a bit rough, so we figure they qualify. These 5 tunes (and the accompanying interview) were recorded in a Manhattan studio whose name I can’t recall sometime in 1992 for a syndicated radio program called The Other Side, which was hosted by Curt Smith from Tears for Fears.

We actually thought we’d lost these tapes in a flood, but TMJ fan Paul Gutierrez contacted us via Facebook to let us know he’d taped the show. So here it is.

Mr. Smith, as you can hear, was both funny and gracious, and since it felt weird to be interviewed by someone more famous than us, we wound up asking him more questions than he asked us.

As with all Rehearsal Tapes episodes, we’re including a way to obtain the downloads. Sometime next month we hope to do away with the a la carte pricing on these things, and implement a way for folks to pay a single price that will unlock access to every single current and future download on the site — so, hundreds of tracks for one low price, which seems like a reasonable compromise between fans who ask very nicely for downloads of everything we post and band members who tend to think only the stuff we officially released was ever meant to walk around proudly in public.

We have no idea what would be a non-evil price to charge for such a thing, so please give us some suggestions.