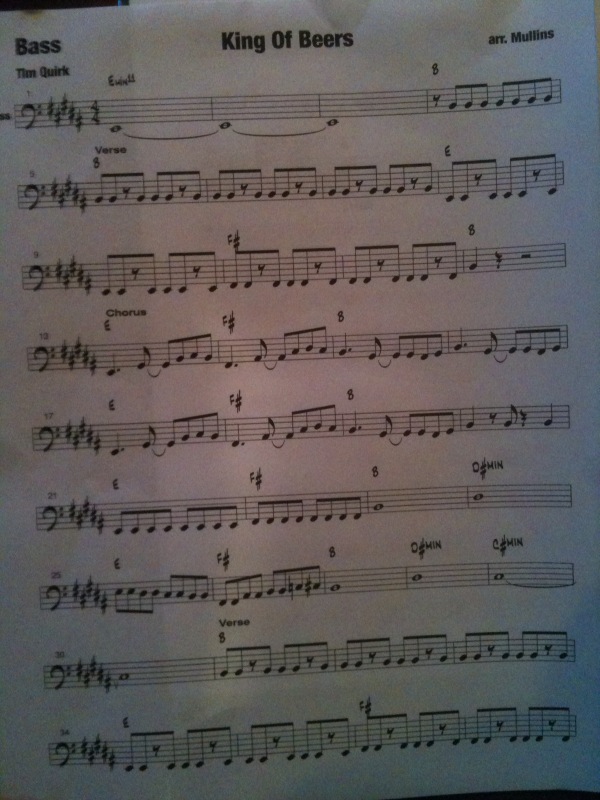 I spent a few days the other week at a mind-blowing Artist Activism Retreat in New Orleans. I’ll be posting a long piece about what-all went on there on the Rhapsody blog before too long. In the meantime, though, some folks have been asking if there’s any audio from the benefit show that capped the retreat, and the answer to that is, yes indeed.

About a dozen musicians attended the retreat, including Southern Gentleman Mark Mullins from New Orleans’ Bonerama, who always back the assembled artists at the closing benefit. Since Bonerama is fronted by three trombones, Mark writes these amazing horn arrangements for whatever tunes each performer wants to sing.

That’s the horn chart for “King of Beers” above. Who knew it had so many notes?! My favorite part of the chart, though, is this notation in the bridge:

It just says, “crazy.” That’s pretty much how the whole night was. After “King of Beers,” we covered The Clash’s “Hateful,” and Tim McIlrath from Rise Against joined on guitar and vocals. You can hear how they both sounded below:

Bonerama’s site has the full set list with all the performers, plus a bunch of pictures from the show. Many thanks to Tim, Mark and the rest of the unbelievably talented and cool Bonerama — and all the other performers, who were also unbelievably talented and cool. It was an honor sharing a stage with them. I hope I didn’t spill too much beer on it.

If you want, you can download both tunes for free, but since this was a benefit concert, I have placed a New Orleans Voodoo Curse on them that will leave you wracked with guilt forever if you do so without donating whatever you can to Sweet Home New Orleans, who’ve spent the last several years helping bring musicians who were scattered by Katrina back to the city, in rebuilt homes when necessary. Alternatively, you can donate to the Gulf Restoration Network, who are working to restore the wetlands between NOLA and the Gulf of Mexico — if those wetlands hadn’t been eroded so much in the last 45 years, Katrina wouldn’t have done nearly as much damage to New Orleans.

Even better if you donate to both!