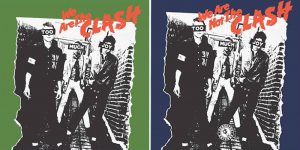 Two Februaries ago, Bill, Jay, Sandy, Tim, and Tommy spent a night at The Loft, the recording studio in Bronxville, NY where Too Much Joy first started recording. We were there to bash out a cover of “We Are The Clash” for a tribute album to Cut the Crap, the Clash’s worst record, which came out on Record Store Day, 2017. Four bottles of wine later, we’d not only finished the Clash tune, but had written and recorded a new, more realistic one: “We Are Not the Clash.”

We always figured they belonged together, and thanks to Matt Flood’s Asbestos Records, now they are, on a 7″ single with very fitting cover art. You can order it now from Asbestos for just six semolians.