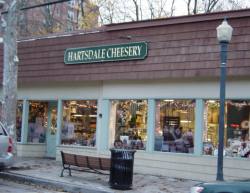 Too Much Joy were saddened by the news this week that the Hartsdale Cheesery has gone out of business. To pay tribute to this hometown institution (technically, it was an institution of the town next to TMJ’s hometown, or, if you were Tommy, who grew up in Eastchester, the town next to the town next to your hometown), we are naming “Pride of Frankenstein” our song of the week, as it is the only commercially released song we’re aware of ever to name check the Cheesery.

Sadly, that may be the most notable fact about the tune. It’s not my proudest moment as a lyricist, and the arrangement is charitably described as busy, which may be why it was played live all of twice before being retired from the set.  Some fans seemed to like it, though — one sent me a letter with an essay he’d written for a high school English class about the song.

The dude the song’s about really existed, and really did used to wander around Scarsdale and Hartsdale writing down the license plate numbers of all the parked cars in a little notebook he carried around just for that purpose. The bit about throwing rocks at him is dramatic license — not that I never did anything cruel to sad figures when I was a kid; I just don’t remember throwing rocks at him, specifically.

In a semi-related bit of trivia, one of the rare arguments I’ve had with my wife happened one night during a Scrabble game, when I scored a bingo playing “cheesery” using a Y that was already on the board. She challenged me. Turns out it’s not in the dictionary.

And now it’s not in Hartsdale, either.