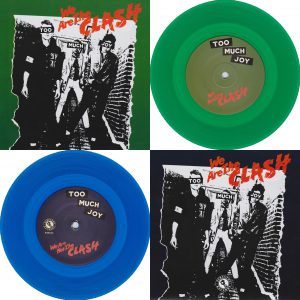 While TMJ never really broke up, it’s become pretty rare for them to perform or record. And the most recent three songs they recorded have been a bit hard to acquire, as they were intended as part of Record Store Day releases and/or have only been available on vinyl.

But it’s almost Christmastime, so as a gift to fans we’re making them all available to stream for free here and now. If you want to give yourself a gift, you can also purchase digital downloads of the tunes. Or, if you’re some kind of Elmer J. Fudd, Millionaire, who owns a mansion and a yacht and a turntable, you can buy the Deluxe Package, which includes a 7″ single with two of the songs on colored vinyl (you can still buy the Deluxe Package even if you don’t possess a turntable with which to play it, as the single is a lovely physical object that rewards you just for gazing upon it).

“We Are The Clash,” a cover of what might be the worst Clash song ever, but which the band had to do when they heard Crooked Beat were putting out a tribute to Cut The Crap (which was definitely the Clash’s worst LP ever), because We Are The Clash was one of the titles briefly considered but quickly rejected for what ultimately became Cereal Killers.

“We Are Not The Clash,” a song TMJ wrote in the studio two years ago while banging out the cover song above.

“Trash City,” a cover of one of the first (and best) Joe Strummer solo tunes, which TMJ recorded for a follow-up Record Store Day tribute LP released by Crooked Beat.

If you’d like to own the songs, head on over to Bandcamp.