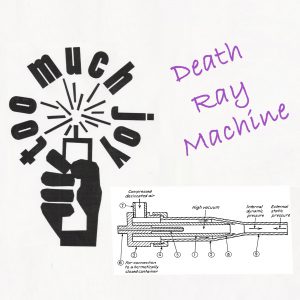 A couple months ago, Sandy was lamenting that the band had never really done justice to “Death Ray Machine,” a song we’d only ever recorded live to two track. Since Tim was going to be passing through NYC the following week, we decided to book some time in a studio and see if we could bang out a version that had the same energy as that live recording, but could finally be mixed properly.

So that’s what we did. Matt Noble recorded the basic tracks in New York, Johannes Luley captured some more in Los Angeles, and, since we were harking back to olden times, our pal Michael James, who produced Son of Sam I Am, mixed everything together with his customary aplomb (you can follow his exploits on social media using the very descriptive hashtag, #MichaelJamesProducer).

You can hear how it came out below (you can also buy it at Bandcamp, if you’d like to help us pay Michael James what he deserves, and/or persuade us we should do more of this type of thing).

We’re so pleased with the results, we’ve been discussing what other songs we wrote but failed to record might benefit from a similar treatment. Here are four contenders. If you have a preference, let us know in the comments, or on our Facebook page.