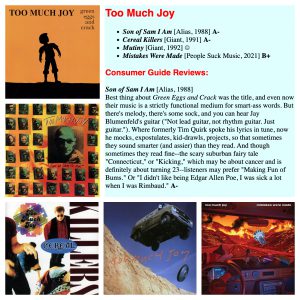 Tim has a guest post up on Robert Christgau’s Substack this week — Bob is turning 80 this month, so his editor Joe Levy asked a few friends/fans/acquaintances to take over for April, in order to give the Dean a month off to celebrate in style.

Joe suggested Tim write about the experience of being reviewed by Bob, which Tim was happy to do. But he also went a bit wider to discuss the overall sceptism a lot of musicians have about the role of critics — a scepticism most members of TMJ do not share, as we self-describe ourselves as frustrated rock critics.